Day of the Dead Skull Tattoos

Skull tattoos are not limited to the "skull and crossbones" design. Read on to learn a highly customizable and unique skull design, based on the Day of the Dead. 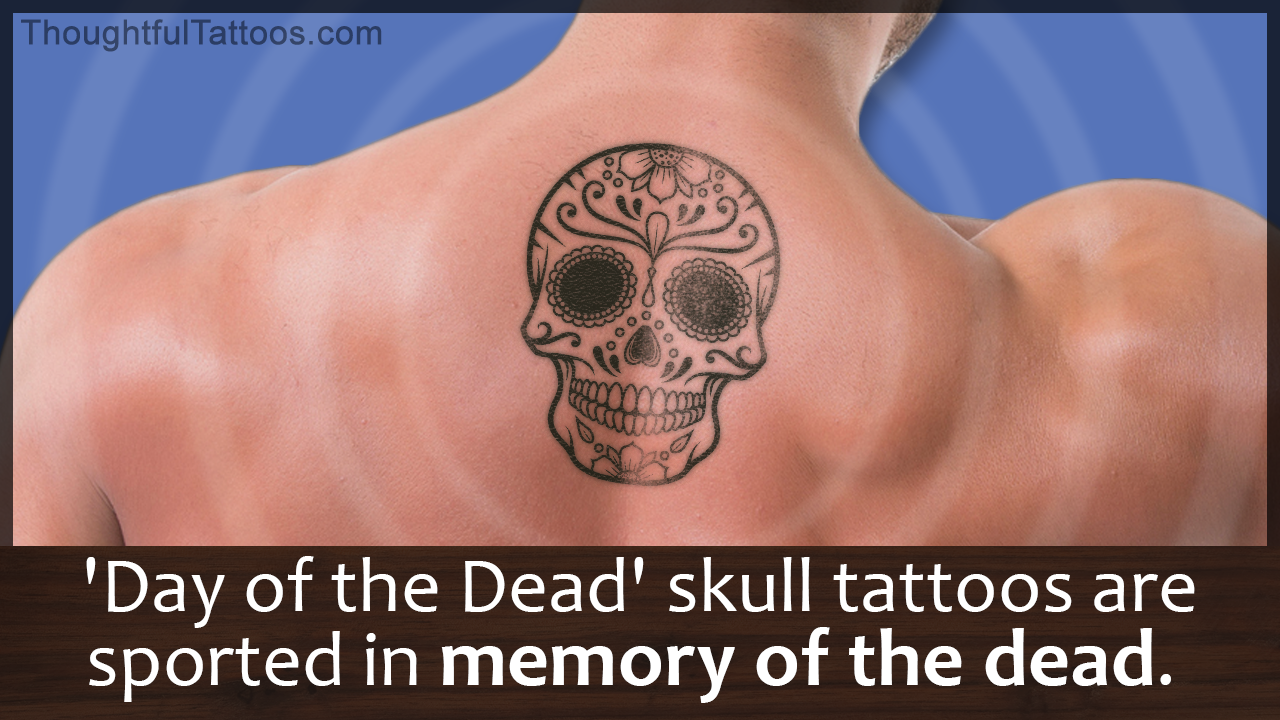 Skull tattoos are not limited to the "skull and crossbones" design. Read on to learn a highly customizable and unique skull design, based on the Day of the Dead.

There are many Gothic and macabre symbols that can be inked on your skin. Dragons, bats, other animals of the night, or gravestones… but nothing makes a statement as much as a skull. Skull tattoos are normally associated with morbidity and grimness, but there is a much deeper and hidden meaning behind such a design. While flaming skulls or tribal skulls are some popular ideas, a unique and symbolic design type is the Day of the Dead skull tattoo design. What is the meaning and story, behind such a different tattoo design? In this article, take a look at the skull tattoo design, one type of Day of the Dead tattoos and a brief idea about the day itself.

Day of the Dead

The Day of the Dead or Día de los Muertos in Spanish, is the day of remembrance and prayers for lost loved ones. On this day, family and friends who have passed away, are prayed for and honored, with feasts and celebrations. This day falls on the 2nd of November, after All Saints Day (Nov 1st), and in tandem with All Soul’s Day. While it is a predominant festival of Mexico and Latin America, it is observed in a similar fashion, but to a lesser extent, in the Philippines and United States. Visits are made to the cemetery to pray at the graves of the departed. At home, private altars are built and decorated with photos and items that belonged to the dead person. Favorite foods and drinks are also placed on the altar, as a reminder of the deceased preferences.

The symbol of the skull has been an integral part of the Day of the Dead, since it originated during the Aztec period. The Aztecs kept their enemies skulls as a sign of victory. The skull of a friend or loved one was preserved, and used during the festival, to symbolize their presence, for it was believed that the dead would visit the living on that day. The practice of keeping actual human skulls, died out with the arrival of the Spanish Conquistadors. But the skull plays a major role in the festival, albeit through representation. Calacas or wooden skulls are worn by revelers, who dance as part of the celebrations. A staple and favorite altar offering is the sugar skull. A paste of sugar, meringue powder and water, is mixed and put in a skull mold, to form a white hard skull. Icing, food colorings, and personal effects like flowers and hats, are used to decorate the skull. Space is left on the forehead to inscribe the name of the dead person. A relative or friend of the deceased can eat the skull. This tradition isn’t morbid, rather it is a powerful stance against death itself. It symbolizes that death is merely a transition from one life into another.

The concept behind creating Day of the Dead skull tattoos sprang from the idea that having a permanent skull design representing the deceased, is a good way to keep their memory alive. And on canvas, the color, design and size of the skull are infinite. The skulls are colorful and large, with bright flowers surrounding them. Sometimes the skull has a design on it, like a motif or pattern. The best thing about these tattoos is the personal touch. To remember someone who has passed away, this sort of tattoo makes a fitting tribute to his/hers memory. Do not go in for a dull or monochromatic design, as bright vibrant colors, depict how even though the flesh and body is dead, a person’s soul can live on through the ones who remember him/her. Use some specific colors and patterns to make a unique design symbolizing the presence of that person. For example, use lily of the valley flowers to surround the skull, for someone who loved lilies. Through flowers, colors and patterns, you can design a skull to the person it is dedicated to. The best place to display such a memento, is the upper arm or back. Smaller-sized skull designs can be drawn on the ankles or legs, or even the lower part of the arm, near the wrist or palm.

While there are plenty of Day of the Dead tattoo ideas available online and in tattoo parlors, try to come up with your own design, so the tattoo will be personally special and unique to you. If you are stumped with drawing the tattoo, take help from the tattoo artist, but incorporate your own pattern and color scheme. Day of the Dead skull tattoos are a deep and artistic way, of showing life’s triumph over death, and paying tribute to someone who you have loved and lost.

'Oni' are demons from Japanese folklore. It is a very popular image in Japanese tattoo art … END_OF_DOCUMENT_TOKEN_TO_BE_REPLACED

For a girl, her father is the most perfect man in the world. For a man, his daughter is … END_OF_DOCUMENT_TOKEN_TO_BE_REPLACED

The all-seeing eye is an esoteric symbol of much speculation for centuries, and like … END_OF_DOCUMENT_TOKEN_TO_BE_REPLACED