Well, seeing feathers in your dream indicates a journey or the ability to move with freedom. If you see white feathers, it means pureness and a clean start in the religious sense.

An Indian feather owes its origin to the Native Americans. It all started as the feathers were a symbol of respect and also as an accomplishment gift to the courageous, by the chief of the tribe. The chief wore the largest number of feathers in his headdress. Native Indian history indicates that when a brave man won, he would come and repeat the story of his bravery in front of the tribal court. After that, he would be rewarded the feather which had to be displayed proudly, and not hidden (or else it is a huge disrespect). The feather had to be cared for every single day, and was never to touch the ground. It served as a reminder of how one should behave.

Indian feathers include feathers of most birds like peacock, hawks, and eagles. Feathers of an eagle would be highly prized as the Natives believed that eagles were close to gods because they flew at great heights. The feather of a blue jay and cardinal depicted medicinal powers and healing. But, owl feathers depicted death.

Indian feathers have so much of history and meaning to it that they make great designs for tattoos. So why not get it permanently inked? It’s not only about a single feather, you can add dreamcatchers, beads, arm bands, or any other form of art to it. Another thing you can do is to add turquoise, coral, or dune colors to add to its spirituality. You can choose where to get them inked, because feathers look really great anywhere!

► Indian feathers signify spiritual protection. One of them is the dreamcatcher which, according to folklore, is said to trap bad dreams, thus symbolizing protection.

► Eagle feathers carry deep symbolism because, in olden times, they were presented to warriors to honor their bravery and courage. At times, it is also associated with the passing away of someone. In few cultures, it is believed that when a feather falls in your path, it means someone you know has moved into the afterlife.

► Due to its rich history, people incorporate feathers, especially peacock feathers, into their tattoo to honor their deceased loved ones.

► Feathers generally stand for new beginnings and new hope. In fact, a single feather signifies luck or birth of something new.

All Meanings in a Nutshell

INDIAN FEATHER WITH BIRDS IN FLIGHT

A single feather of any bird stands for luck or birth of something/someone new. You can get it inked on your ribcage or sides, on your upper/lower back, arms, or on your ankle―any place actually. You can make it creative by either including a short, meaningful phrase that you relate to, or you can have small birds coming out of the feather, which could mean reaching for the sky.

There’s an old legend which says the spider woman protected her newborns from having bad dreams by weaving magical webs around them. Later, on similar lines, women created dreamcatchers to protect their newborn babies. So, you can opt for a dreamcatcher tattoo design on your arm or back, which symbolizes entering of dainty dreams and trapping the bad ones in the web forever. The feather movement heralds the coming of a peaceful dream.

Here’s a unique beaded feather tattoo which is more like a headpiece and was worn by warriors for achieving a great feat. So, knowing what it represents, you can always think of getting this design inked on your body, maybe behind the ear, as shown in the image above.

FEATHER FRAME WITH A TRIBAL FACE

Native American man in a feather frame, that’s what the tattoo depicts. This will make for a nice tattoo on the back.

A SPECK OF BEAUTY!

An Indian feather tattoo, rather a peacock feather, is worn for its beauty and design, and doesn’t this tattoo have that? A simple yet elegant native peacock feather that will do wonders to your collarbone once it is inked!

We simply looovve everything about this tattoo. The tattoo showcases a woman’s face, feathers, and her hair with distinct details in red and black. This tattoo can be inked entirely around the bicep area as represented above.

The above is a beautiful tattoo depicting feathers on the feet. You can make an addition of three feathers strung together from a thread (or even beads), and can be worn on the foot, just near the ankle. Elegant as ever!

INDIAN FEATHER FRAME ON BACK

If you want something bewitchingly striking, profiling a woman’s face can achieve that, go for the above design which depicts a dramatic face with a head full of Indian feathers. It can be a perfect tattoo for the back as you get more space for extra detailing.

A strikingly colorful and lovely peacock feather makes for a good choice of tattoo design on the back and arms. The peacock feather symbolizes reincarnation and renewal in Christianity, while on the other hand, it also stands for sanctity, purity, and a glint of self-love sometimes.

ELEGANT FEATHER ON A FINGER

This one can simply be inked somewhere near your fingers. It describes the wearer to be a free bird in flight, and the tattoo can also be part of angelic symbolization.

LAST TWO, BUT NOT THE LEAST

After having gone through each intricate tattoo design, we hope it has inspired you enough to get one inked. You can make each of these design ideas more stunning by adding colors or using significant elements like beads and threads. Well, the list of variations can go on and on. But always remember that these are permanent so make sure you put a lot of thought into it before getting one. 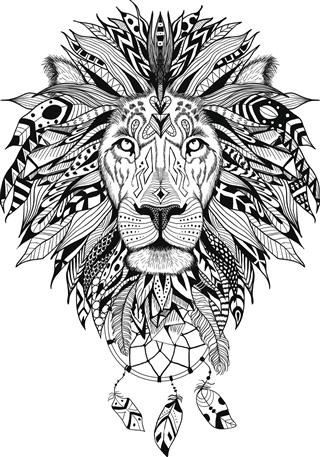 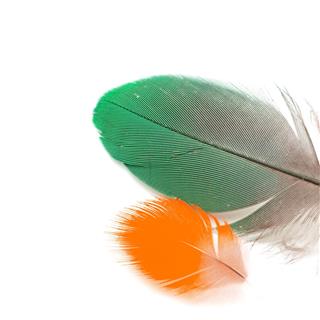 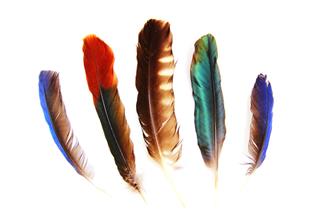