Talk about fashion and trends! It's been changing leaps and bounds over the last couple of years. So what's amongst the newer trends? Toe ring tattoos. If you don't know much about them, read on... 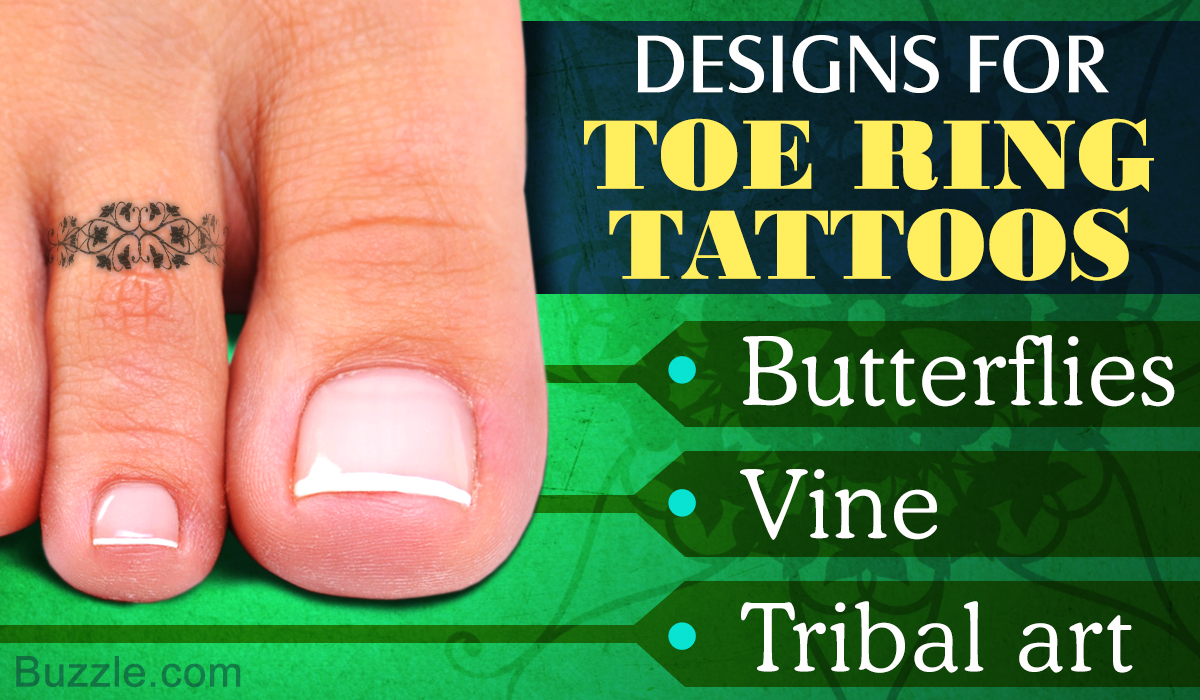 Talk about fashion and trends! It’s been changing leaps and bounds over the last couple of years. So what’s amongst the newer trends? Toe ring tattoos. If you don’t know much about them, read on…

Girls love dressing up and accessorizing. All they need is an excuse. Makeup, jewelry, bags, just about anything works. As long as it looks good, we’ll take it. Now, tattoos act as an interesting accessory too. How the look of a tattoo has evolved over the years is also remarkable. There was a time when a tattoo made a guy, “a guy”, and then there’s now, when girls get themselves inked ‘coz it’s cute! Strange, but true! It’s rare to find girls who don something other than a tattoo that screams out cute, and if you do find a girl who doesn’t appreciate cute, she most certainly is different and has a mind of her own.

It’s also true that most girls will play it safe when choosing their tattoo design. Amongst the more popular and common styles and designs are one word tattoos for girls, butterfly tattoos, star tattoos, ambigrams, fairies, and irezumi. A trend that’s really catching on these days is that of tattoos on toe rings. Why people choose what they do as their tattoo design is sometimes hard to understand. For some it’s a question of being one with the crowd, while for others it’s about their identity, and it is normally in cases like these when the tattoos really mean something more than mere body art. These tattoo ideas are no different from this idea. So let’s see what these designs mean, as well take a look at a few ideas.

Not all such tattoos have meaning associated to them, but the toe ring as the piece of jewelry surely does. In most cultures it is simply a fashion accessory, and nothing more. In India, however, a toe ring was traditionally a sign of a married woman, as she would be the only one to wear one. Wearing a toe ring on the big toe of the left foot was indication of a woman’s married status. They were also supposed to be worn in pairs, which is quite unlike how we wear them today.

This concept of only married women wearing a toe ring, is however, gradually fading out. Moving on to the meaning of toe rings in the form of tattoos… While in most cultures, it is nothing short of a fashion statement, there are patterns that do have a certain significance to them. The cherry blossom pattern is one such example. We’ll take a quick look at the variety that this style of tattoos has to offer.

A Symbol of Life

The Japanese cherry blossom is believed to be a symbol of the brevity of life. Reason being, this flower blooms for a short period of time. The theory behind getting oneself tattooed with this design is to indicate that one must not get too attached or emotional about things in life.

An Extension of Life

This is another representation of the Japanese cherry blossom, only this is represented by the fallen cherry blossom. A tattoo of this kind generally refers to the life lost early by a Japanese Samurai warrior. It’s interesting, isn’t it, that the same flower can have two representations that are so different from each other.

A Symbol of Power and Female Dominance

While the above two ideas were represented by the Japanese cherry blossom, it is the Chinese cherry blossom that is a symbol of a woman’s beauty, sexuality, power, and independence. In this oriental culture, the cherry blossom also signifies love, happiness and prosperity thus, making it a common choice amongst tattoos for girls.

If you know you want a tattoo to look like a toe ring, but are running short on ideas, maybe the following would help…

Now you know the implication behind these tattoos for most people, as well as have a few ideas regarding designs. It is also very essential to make sure you know what you want to get. If you are one of those people who believe in signs, meanings, etc., think well before going ahead and getting inked. On the other hand, if you are amongst those people who doesn’t believe in such ideas, you have nothing to bother about. Go right ahead and choose from whatever appeals to you the most. So, the next time you’re looking for ideas to accessorize your feet, think beyond nail polish, anklets and the classic metal toe ring. Instead, think of tattoos!

'Oni' are demons from Japanese folklore. It is a very popular image in Japanese tattoo art … END_OF_DOCUMENT_TOKEN_TO_BE_REPLACED

For a girl, her father is the most perfect man in the world. For a man, his daughter is … END_OF_DOCUMENT_TOKEN_TO_BE_REPLACED

The all-seeing eye is an esoteric symbol of much speculation for centuries, and like … END_OF_DOCUMENT_TOKEN_TO_BE_REPLACED