Like all other religious and cultural beliefs, the Celts also have a long standing admiration and respect for the Tree of Life. Its tattoos have gained immense popularity over the years and there are so many details involved in this depiction, that there are thousands of possibilities available. 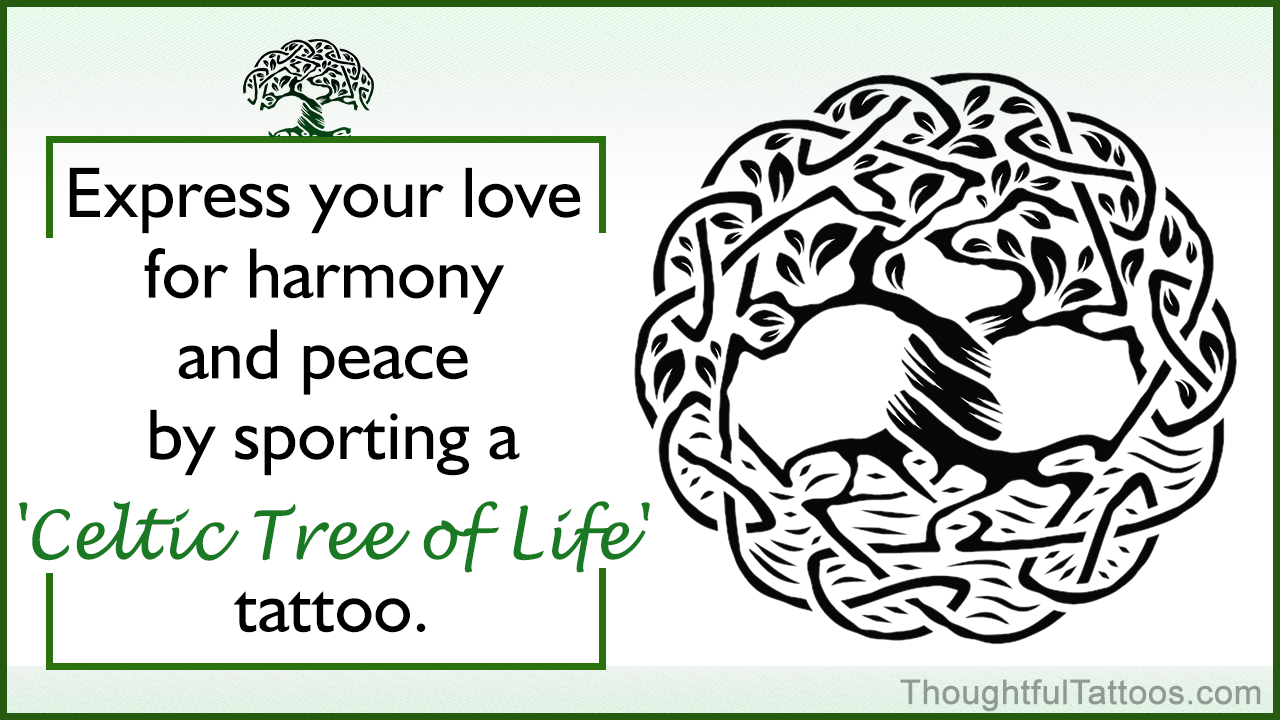 Like all other religious and cultural beliefs, the Celts also have a long standing admiration and respect for the Tree of Life. Its tattoos have gained immense popularity over the years and there are so many details involved in this depiction, that there are thousands of possibilities available.

Celtic tattoos are generally big and colorful designs that are mystical and alluring. Of the many designs, the Tree of Life is more popular in this sect. Its significance and symbolism lends the tattoos an aura of mystery and also illustrates a great fondness for religion and heritage. Celtic tattoos, in general, are deeply surrounded by a lot of old world faiths and beliefs, that have been passed down through centuries.

The Biblical story of creation tells the tale of how God filled the Garden of Eden with many trees that contained delicious fruits. Two of the primary trees in that garden were the Tree of Knowledge and the Tree of Life. The latter was planted by God, and serves as a reminder of everything that the tree stood for and signified. In fact most major religious beliefs illustrate the one gigantic tree with its branches reaching into heaven and its roots entrenched in the earth below, that depicts the circle of life.

The illustration serves as a depiction of the connection between God and humankind via the branches of the tree. In reality, there are many different ways of looking at the design, and each of them can be said to carry a different perception for the beholder. Its meaning may slightly differ from the beliefs of other cultures, but the essence of the symbol is primarily the same.

Importance of Trees in Celtic Art

Trees have always held a deep significance in communities, societies, and every culture. Depictions of large trees can be seen in many old scriptures and paintings as well, and no matter what culture it is, the Tree of Life has always been a source of great reverence for the offering of prayers and gratitude. Celtic art and culture has also adopted this belief system and due to the fact that Celtic tattoos are very popular, these designs have gained immense popularity.

In the history of Celtic culture, trees have always been looked upon as an undying connection between the different realms of existence. The huge size of the Tree of Life meant that it served as a means of communication and conduit between the Gods and human beings, and it was a metaphor of sorts of the spiritual growth of human beings. The symbol was not created until 800 A.D. though, and people who sport it imply that their spiritual growth and transcendence is well underway. The tattoo designs itself can be taken to mean different things for different people, but the broad message remains unchanged.

There will always be differences in the tattoos of tree of life sported by different people, but the basic elements of the design remain the same. The three elements that you will see in every design are the long roots that stretch deep into the ground, the long branches that spread out into the heavens, and the presence of a strong sturdy trunk. Celtic tattoos also make use of endless sequences of knots, and these can also be ingrained into the design.

Some other additions to the design can be made in the form of any of the seven life forms that the Celts believed existed on the planet.

Any combination of these life forms can be depicted in one of these tattoos. This large collection of possibilities along with the tremendous scope of colors that can be added, make them a great choice for expressing creativity. Since there are a lot of details involved here, these tattoos are generally very big in size, though smaller designs are possible as well.

Before you go ahead and get a tattoo, make sure that you browse through a fairly large number of preexisting designs. Try to add your originality to a design and make it unique, and alter anything else as you may deem fit.

'Oni' are demons from Japanese folklore. It is a very popular image in Japanese tattoo art … END_OF_DOCUMENT_TOKEN_TO_BE_REPLACED

For a girl, her father is the most perfect man in the world. For a man, his daughter is … END_OF_DOCUMENT_TOKEN_TO_BE_REPLACED

The all-seeing eye is an esoteric symbol of much speculation for centuries, and like … END_OF_DOCUMENT_TOKEN_TO_BE_REPLACED