A Confederate flag tattoo is one of the controversial tattoo designs today. Here is information on the significance and designs ideas for the same. 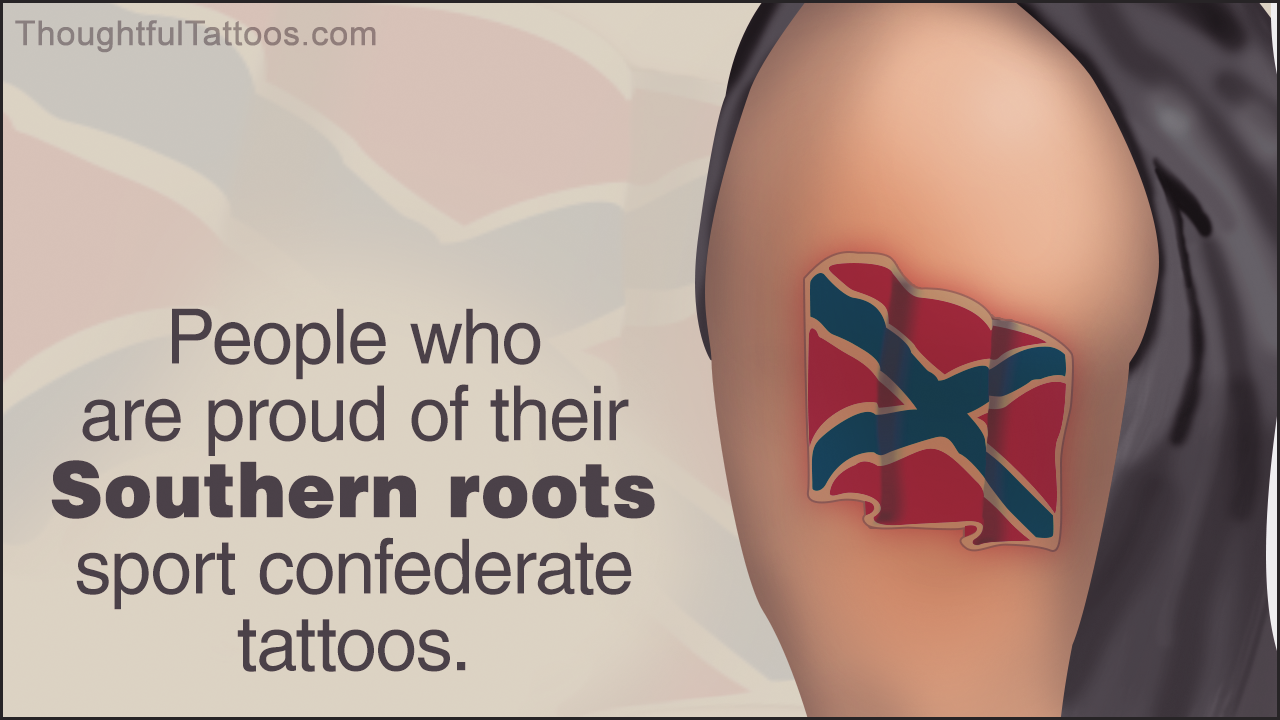 A Confederate flag tattoo is one of the controversial tattoo designs today. Here is information on the significance and designs ideas for the same.

Tattoos are a popular form of art today and also loved by people all around the world. Just like any other form of art, there is no segregation involved among people who wish to have a tattoo. It can be sported by people of any age group, of any caste and creed, living in any part of the world. However, ironically, one of the meanings of confederate flag tattoos is segregation or racism.

As mentioned above, people who are very proud of their Southern roots sport confederate or rebel flag tattoos. Some people may consider it similar to the American flag tattoo design. These tattoos are also considered similar to military tattoos as the confederate flag was used during war. Therefore, if you wish to have a tattoo which symbolizes any war-related designs, you can definitely go for it. Sporting the confederate or the rebel flag is not taken well by the African-American community. There are also chances of people considering you a racist and hence, you need to put a lot of thought before going for a permanent tattoo depicting the confederate flag. If you are sure of sporting this tattoo with confidence, then you can have it made in different patterns and designs.

As mentioned time and again, the confederate flag tattoo is sure to attract a lot of attraction, controversy and also raised eyebrows. Therefore, you need to be very careful in deciding on which part of the body should the tattoo be made. As the confederate flag itself has bright colors, the tattoo simply looks awesome. The exact design of the flag is the most favored design, but, you can even design your own tattoos using your creativity. You can personalize it by adding names or initials of your or your loved ones. Sometimes, people also add flames, anchors, eagles, etc. around it to make it more unique. You can even take your tattoo artist’s suggestions into consideration. But, you should be very careful not to offend anyone with your tattoo design.

Confederate or rebel flag tattoos are accompanied with many consequences and controversies. This should be remembered before having a permanent tattoo as tattoo removal is equally painful as tattoo making. If you still wish to go for it, have a decent confederate flag which will portray your pride of your Southern origins!

'Oni' are demons from Japanese folklore. It is a very popular image in Japanese tattoo art … END_OF_DOCUMENT_TOKEN_TO_BE_REPLACED

For a girl, her father is the most perfect man in the world. For a man, his daughter is … END_OF_DOCUMENT_TOKEN_TO_BE_REPLACED

The all-seeing eye is an esoteric symbol of much speculation for centuries, and like … END_OF_DOCUMENT_TOKEN_TO_BE_REPLACED