The fanciest card in the deck sure makes a fancy tattoo design. Yes, we are talking about the Ace of Spades. This card, also the card of death, can be interpreted in several ways. Check out 10 really cool Ace of Spades tattoo designs, along with their meanings, in this ThoughtfulTattoos write-up. 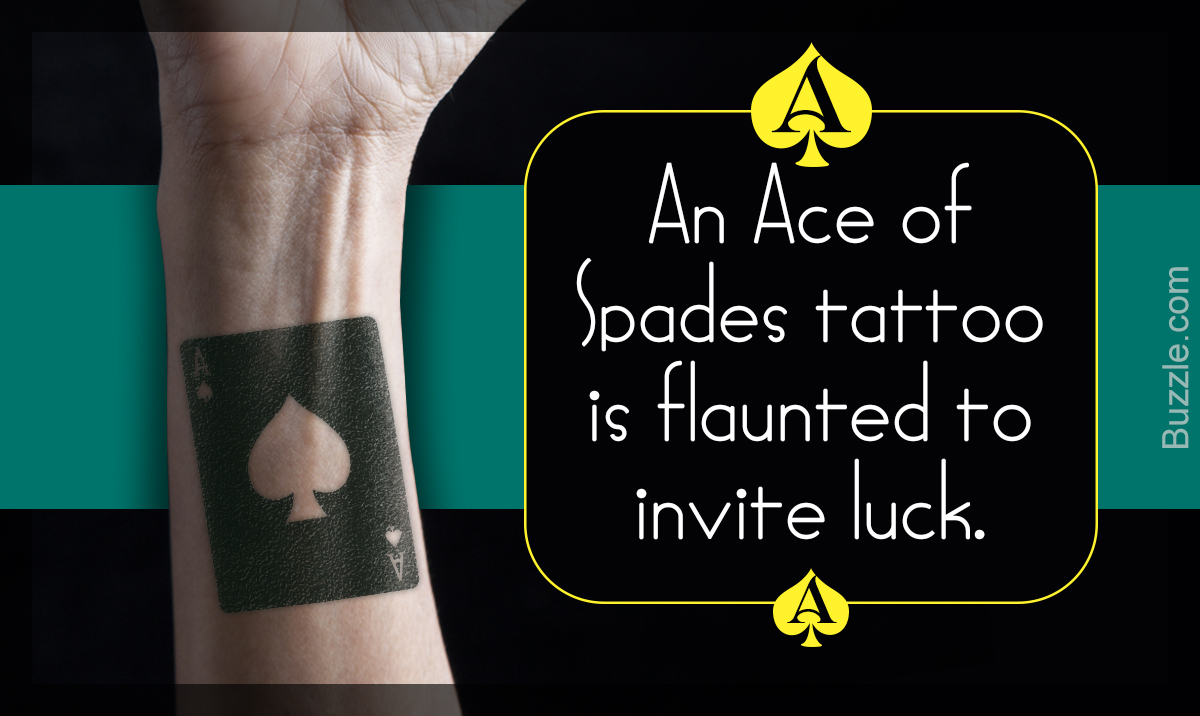 The fanciest card in the deck sure makes a fancy tattoo design. Yes, we are talking about the Ace of Spades. This card, also the card of death, can be interpreted in several ways. Check out 10 really cool Ace of Spades tattoo designs, along with their meanings, in this ThoughtfulTattoos write-up.

Ace of spades was painted on the helmets of American soldiers during the Vietnam War and World War 2, to bringgood luck. It also served the purpose of psychological discouragement to the enemy, as it was known as the card of death.

Tattoos can be beautiful, meaningful, spiritual, or just to portray your love for something special in life. While some tattoos have a deep personal connection, others are flaunted to attract positivity and good luck. There are some symbols that have a very basic meaning, and can be paired with different designs to project various connotations.

One such design that looks good and can be flaunted anywhere on the body, by both males and females, is the Ace of Spades. The most important symbolism of the Ace of Spades is ‘good luck’. Pairing an Ace of Spades with different symbols gives the tattoo varied meanings. It can have both positive and negative symbolism.

Now that you know the different aspects that the fanciest card in a deck can portray, here are some awesome design ideas.

Designs With An Ace of Spade

Show your strength and fearless attitude with grand Ace of Spades tattoo. You can combine different elements and flaunt a regal tattoo.

After all, the Ace of Spades is the highest ranked card in a deck of cards. You will grab all the opportunities in life, and the most of what destiny bestows upon you.

A simple Ace of Spades card can be flaunted to attract luck and positivity in life. It can also be associated with gambling.

For the artistic souls, there are options like tribal, Celtic, or abstract designs as well.

The exact meaning of the tattoo will differ according to what you pair it with, and also where you place it.

Combine an Ace of Spades with dice, poker chips, cards, money, coins, or gold, to portray your love for gambling.

You can even have a royal flush or the Ace, King, Queen, Joker, and Ten of Spades. These tattoos can mean wealth, prosperity, or chance.

Ace of Spades tattoo designs with elements like a skull, blood, or flames have a single meaning – death.

Although they are very dark, sometimes they can also mean overcoming death, fearlessness, fighting spirit, and the like.

They can also stand for rejuvenation.

You could use any of these designs for yourself, or even tweak an idea around a bit so that the tattoo you get suits your personality and likes perfectly. I see you heading to the tattoo studio already!