Fleur-de-lis is a popular symbol in the French culture and even otherwise. It has been widely used as a design in architecture, décor, and now, it is becoming a popular choice for tattoos. ThoughtfulTattoos contains some amazing fleur-de-lis tattoo designs and explains the meaning and symbolism of the same.

Fleur-de-lis is a popular symbol in the French culture and even otherwise. It has been widely used as a design in architecture, décor, and now, it is becoming a popular choice for tattoos. ThoughtfulTattoos contains some amazing fleur-de-lis tattoo designs and explains the meaning and symbolism of the same.

Fleur-de-lis is a stylized version of the beautiful lily flower belonging to the species Iris pseudacorus. It is a highly significant sign, be it religiously, politically, or artistically. It is a French term where fleur means ‘flower’ and lis means ‘lily’―the flower of lily.

This symbol is legendary, an optimal representation of royalty, power, class, and grandeur. Not only does this symbol play a crucial role in French heraldry, it is also significant in Christian religious art. You will see this symbol on crowns, flags, military badges, university emblems, literature, and so on. The bottom line is: each and every facet of our life can be associated with this symbol, with different countries sporting it in some way or the other.

These points just signify how important the significance of fleur-de-lis is, historically. But to get this symbol tattooed on your skin would take more; it would need a sense of association, a connection, wouldn’t it? Well, if you love this symbol, lilies, and France, you must get it inked. If you need more reasons, the following section will help you.

These tattoos have a wide range of meanings and interpretations, and there are a lot of ways in which you can get this design inked. Mostly, people opt for small fleur-de-lis tattoos and place it on their fingers, wrist, nape, or combine them with different elements to create a unique design of their own. The following designs will give you some ideas when it comes to the creative adaptations of this tattoo design. 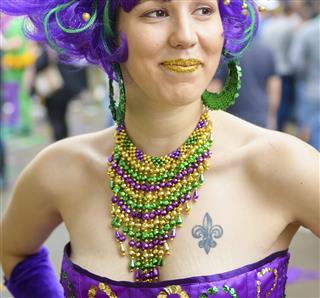 Isn’t it beautiful how these three beautiful delicate petals can be modified to look so royal, strong, and bold? We believe that symbols are multifarious, and can be interpreted by different individuals differently. The following is a gist of what this powerful symbol may signify in your life.

Haven’t you seen this symbol in royal crowns? For centuries, fleur-de-lis is considered to be a royal symbol. Although many stories have been based on its origin, one of the most famous one goes like this: In France, when Clovis was sanctified as King, it is said that an angel descended from heaven with the Holy Ampulla that was shaped like fleur-de-lis to anoint the king. Therefore, this symbol became a prominent symbol to the Kings of France, signifying that their rule was chosen directly from God.

Speaking of God, another meaning of this symbol is associated with Christianity. Lily has always been a representation of the Virgin Mary; however, in the 11th century, cathedrals had issued coins with the images of Mary holding the fleur-de-lis. Later, this symbol was found on the seals of cathedral chapters.

The three petals of the fleur-de-lis are also interpreted as the Holy Trinity. Very often, a band is placed at the bottom, which is a symbolism of the Virgin Mary, for the Trinity is considered to be incomplete without her, as she is the one who gave birth to the Son.

During the reign of King Louis IX (St. Louis), one of the three petals of this symbol represented chivalry. In fact, this is not the only woman-oriented depiction of this symbol. From the mid-12th century, in medieval England, a noblewoman’s seal contained the image of a woman with the symbol of the fleur-de-lis, depicting “female virtue and spirituality.”

While one petal symbolized chivalry, the other represented faith. It was through their strong faith in God that the Kings ruled throughout the lands, and considered themselves to be the chosen ones from above. Therefore, this special flower also represents faith and hope, that the Lord will provide all the strength and courage to the bearer of this sign, for prosperity and success.

Besides chivalry and faith, the third petal is symbolic of wisdom. With power comes responsibility, and it is impossible to reign and sustain one’s power without wisdom. Therefore, the three petals of this flower gave its bearer faith, wisdom, and chivalry, marking the person’s character with substance and goodness.

Apart from the meanings listed above, the other implied symbolic representations of the fleur-de-lis include wealth, valor,allegiance, honor, courage, and unity.

Fleur-de-lis has a very interesting and vast historical significance. Go to any renowned palace, temple, or church, and you will see that most of them will have this symbol either in their architecture or paintings. The rich heritage that it depicts makes this tattoo no less than a royal gift in itself. If you can associate with any of the aforementioned meanings of this design, be sure to adorn your body with its beauty and grace like a royal seal of honor.