A bee is such a tiny little wonderful creature that carries a great symbolism in this big wide world. Bee tattoos are increasingly gaining attention because their meanings are awe-inspiring. ThoughtfulTattoos will give you 10 amazing bee tattoo designs and their meanings to help you understand the life of this creature a tad bit closely.

A bee is such a tiny little wonderful creature that carries a great symbolism in this big wide world. Bee tattoos are increasingly gaining attention because their meanings are awe-inspiring. ThoughtfulTattoos will give you 10 amazing bee tattoo designs and their meanings to help you understand the life of this creature a tad bit closely.

The Ancient Near East and Aegean cultures believed that the bee was a sacred insect that linked the natural world to the underworld. Its symbol was also used to decorate tombs. In fact, the Mycenaean tholos tombs were also shaped like beehives.

Who could possibly think that bees had such a rich mythological influence during the ancient times! Various myths and legends from different tribes are associated with these creatures. Apparently, according to the folklore famous among the Kalahari desert’s San people, it was the seed of a bee that created the first human on Earth. The story goes something like this: A bee helped a mantis cross a raging river by carrying it. However, towards the end, the bee got exhausted and left the mantis on a floating flower. Before the bee died, it planted a seed inside the mantis’s body, from which was formed the first human.

Not only are bees associated with life, death, and the underworld, they are also believed to be linked with the gift of prophecy and eloquence. According to the Homeric Hymn to Apollo, Apollo’s gift of prophecy was given to him by three bee maidens, usually known as the Thriae. Also, honey was acknowledged as the “food of gods”, and it was believed that anointing one’s lips from honey gave them the gift of eloquence.

These are a few of the many tales associated with bees, and now, it is needless to say how much value this beautiful little creature holds in our world, since time immemorial. It is all these beliefs and more, that make way for these designs to reach the collection of proud tattoo enthusiasts. The following section will help you understand if a bee tattoo is for you or not.

A bee tattoo is for those who are sweet but not gullible, who believe in peace and harmony but will not hesitate to fight for their family’s safety, and who believe that in unity, hard work, and having a structured way of living life, lies the key to peace and happiness. A bee symbolizes not one aspect of life but many, including unity, determination, sacrifice, protection, loyalty, intelligence, leadership, and royalty.

“United we stand”. This saying is absolutely appropriate for these creatures. While alone, a bee is vulnerable, but together, they are unbeatable. A beehive in a tattoo is a classic representation of one’s dedication towards their family’s unity, bonding, and acceptance of the social order and hierarchy that is set by those in authority. Believe it or not, a community of honey bees has very often been perceived as an ideal model of human society by many political theorists such as a Aristotle, Tolstoy, Plato, and Shakespeare.

Every bee colony is ruled by a ‘Queen Bee’. She demonstrates the possessor of the ultimate power to rule one and all in her colony. Not that she’s a barbaric ruler, she is a provider who leads the thousands of bees in her colony, and ensures law and order. This tattoo is ideal for those women who are not afraid to take charge of their lives along with the lives of those whom she loves. A queen bee tattoo is an apt way of depicting a responsible ruler who reigns with justice and humility, not with arrogance and greed. Therefore, this tattoo symbolizes royalty, seniority, responsibility, power, and the ability to provide for all.

A bee-you-ti-full tattoo of this theme is the one that comes with a beautiful flower! Bees and flowers together are like trees and soil, river and bank, relationships and love; different, yet inseparable. These two elements help each other thrive. Had it not been for the flowers, there would be no honey, no hives. Similarly, had it not been for pollination, we wouldn’t have had as many as nature’s gorgeous flowers to witness. This tattoo idea symbolizes fertility, a sense of sweetness and beauty in one’s life. It shows how by fulfilling our own duty, we also fulfill many other things that nature has planned for all the things that live.

One look at the honeycomb, and one is sure to get amazed as to how these lovely little creatures can create a structure so perfectly-shaped and orderly! These tattoos remind their wearers of the sweet taste of hard work, that how fulfilling one’s duty consistently, one can avoid chaos and live in an environment that is clean, sufficient, and whole in itself. Another thing that this theme depicts is intelligence. We mean the simple fact that renowned scholars look up to bees for their ability to run a colony without any chaos, is enough to prove that these are extremely intelligent creatures who have segmented each and every task in such a way that everything is clarified and structured.

A bee will never harm you if you mind your own business, but neither will it spare you if you seem to be the culprit behind disturbing its peace and harmony. As harmless as they may seem, we all know the power they possess when it comes to their defense. Their aggressive venomous stings are no match to the unarmed. A bee will never chicken away, but will do all that it can to protect its colony, its members, and their queen, even if it means letting go of one’s own life. Though a tattoo of a bee’s horrid attack would be a bit difficult to create, the same meaning can be portrayed with a little creativity involving caricatures of a bee. We think such tattoos look so damn adorable!

It wouldn’t be wrong to call them adventurers, in the sense that they are not scared to take risks and leave home in search of supplies that provide for their colonies. You know that bees have this amazing quality of traveling great distances and still being able to find their way back home. It is because of this quality that bees are also identified as ‘souls from heaven‘. Their life itself is symbolic of hope, and even though struggles and hardships come their way, they make sure they succeed, either by giving their life to protect their loved ones, or by living in diligence and honorably fulfilling their duty.

Just Because they Represent the Aforementioned! 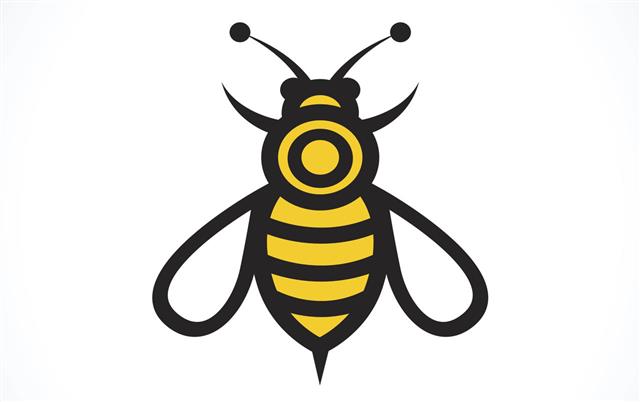 There are a lot many things that a colony of bees can teach us humans, and perhaps, the most important of all is unity. It is remarkable how every bee is content with its given role and does not rebel to gain power. The guards, workers, queen, everyone respects each other’s role, and that is what keeps them together. Well, while we might get caught at times in the midst of our shallow pride, egos, and jealously, a bee tattoo would remind us to bee happy with what we have, and work hard towards what we can bee in the company of our loved ones, where everybody lives in peace, harmony, and togetherness.