The ultimate symbolism of the 'Grim Reaper' is death and its inevitability. Although a tattoo of this psychopomp would mostly be perceived as evil and dark in nature, to your surprise, it could reflect positivity to quite an extent. This ThoughtfulTattoos article explains the meaning and symbolism of Grim Reaper tattoos in order for you to evaluate if you should sport this design or not.

The ultimate symbolism of the ‘Grim Reaper’ is death and its inevitability. Although a tattoo of this psychopomp would mostly be perceived as evil and dark in nature, to your surprise, it could reflect positivity to quite an extent. This ThoughtfulTattoos article explains the meaning and symbolism of Grim Reaper tattoos in order for you to evaluate if you should sport this design or not.

Although death has been a part of this world since its very inception, the association of the ‘Grim Reaper’ with death began only in the late fourteenth to early fifteenth century when the world saw death like never before in the form of plagues, wars, and famines. The skeletal form wearing a black cloak became a symbolism of the end of life then, and continues to be so until now.

The figure that we all address as the “Grim Reaper” has so far gained the appellation of the harbinger of life’s end. This portrayal of death is perhaps man’s way to acquaint himself with the end of life, and overcome the fear of the unknown deities/forms/ethereal beings that the spirit may encounter once it’s separated from the flesh. Various artists, poets, writers, and intellects from all walks of life have depicted the Grim Reaper in many ways―in the form of writings, paintings, sculptures, songs, and the like, thereby, making this symbol popular among many body-art enthusiasts, as well.

Before inking any tattoo on yourself, it is very important for you to establish a connection with the given theme, spiritually. While it is not uncommon for people to ink designs just for the aesthetic appeal of it, a meaningful symbolism accompanied by a design, definitely makes the tattoo worth cherishing all the more. When it comes to inking a Grim Reaper tattoo, it would be interesting to know how versatile its symbolism could get. The following section discusses the same.

Meanings and Symbolism of a Grim Reaper Tattoo 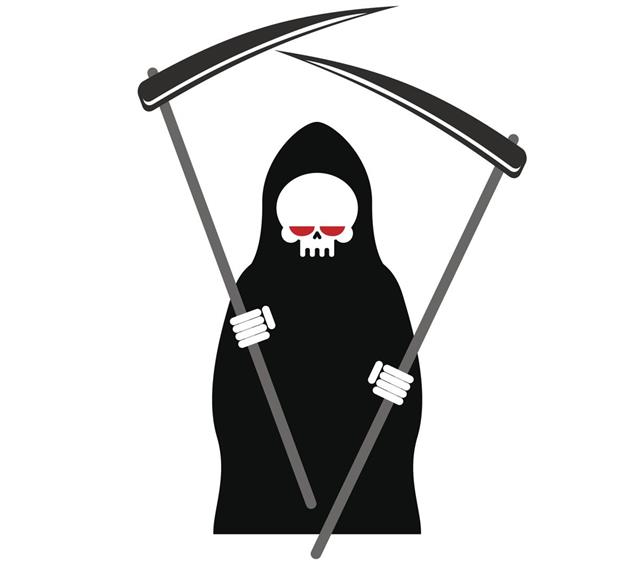 The bony fingers that point towards you, the skeletal gaze that haunts you, and the tattered cloak that seems as dark and lifeless as it possibly can; clearly, this tattoo is definitely not for those who get goose bumps when they think of this psychopomp. This tattoo is undoubtedly for those who don’t see death as a fearful occurrence, but a part of the cycle of life. It is for those who understand that the Grim Reaper is simply a sentient entity that only takes our ethereal form to its rightful place. In fact, this entity can help us remind of a lot many essential things in life. Some of them are explained in the following points, thereby highlighting the meaning of this tattoo theme.

Death is a Door to Another Life

Those who view death as more of a new beginning than a mere end, would complement this design quite rightfully. Yes, contradictory to its popular symbolism, the end of life, a Grim Reaper can also signify a passage to the beginning of another life. The belief in rebirths, reincarnations, or a different form of life after death isn’t unheard of. This tattoo, in this case, would act as a reminiscent that you would eventually meet the scythe-bearer in due time, wherein he will be the carrier of your soul to the afterlife, the ultimate place of judgment, reward, punishment, and perhaps, rebirth.

Most of us tend to take life as a burden, especially when we encounter pain, disappointments, and failures in life. Most of us also end up taking a lot of life’s gifts for granted. Some of us get so engrossed in building a materialistic haven, that we actually forget to experience life’s true essence, which is to appreciate, love, learn, and move on. A Grim Reaper design, in this case, can help in embracing and appreciating whatever time we have on earth. It emphasizes the fact that every moment passed is a step closer to death, and so it must be lived as happily and cheerfully as possible.

Remember the Departed with Honor

Skull tattoos have always been a way to remember the dead, oftentimes inked with a dear one’s name. Similarly, a Grim Reaper design can also symbolize the memory of a dear one who has now moved on to the afterlife. Additional elements such as a grave, name of the deceased, a rose, and a quote, can make the entire design look absolutely gorgeous. Nonetheless, you can also customize it furthermore based on your personal memories associated with the deceased person.

Be Triumphant Over Your Fears

They say that the best way to overcome your fears is to face them. For many of us, death is perhaps the biggest fear of all. Sporting this tattoo can somewhat help us accept the fact that fear only makes things worse and that death is as likely as birth. This tattoo is also symbolic of bravery, which is why you will find it on many marines and soldiers. These warriors tend to encounter near-death experiences in their careers almost everyday, and therefore, this tattoo is quite a remarkable way for them to portray their fearlessness towards death.

This entity is neither good or evil. It just does its job to harvest the souls of the departed to the afterlife. Legend has it that it is almost impossible to trick, convince, or persuade the reaper to spare your soul. It gazes at you with an emotionless stare, the darkness it wears overshadows all that it contains. In the practical and rigid world that we live today, most of us choose to wear a mask, be immune to feelings, attachments, and emotional blows of life. We say mask because being humans, emotions inevitably form a part of our existence. Hence, this tattoo may also depict an emotional closure from the world.

Obsession with Death, Evil, and Darkness

There are quite a lot of folks who are obsessed with the unknown, with death, darkness, afterlife, and the whole eeriness that these elements emit in general. Some believe these tattoos to be sported by those who worship Satan, or, who are involved in practices associated with devilish cults. Alternately, some people just admire such dark themes and opt for them simply because of the fact that they seem cool and unconventional.

The Grim Reaper has been associated with various historical beliefs, and many speculations have been made in terms of its history and origin. While all the aforementioned meanings of this theme signify inspiration, end, darkness, and negativity, you would be surprised to know that in Roman culture, a Grim Reaper is considered to be a symbol of good luck!

Although, a typical grim reaper design consists of a skeleton wearing a very loose, black-colored coat, hunting for souls with a scythe in his hand, you can experiment with the background, additional elements, placement, shading technique, and other aspects of the design to make it look different and totally customized as per your taste. Make it as traditional or as modern as you like with the use of your imagination and tattooing techniques; however, ensure that the meaning of the tattoo is clearly reflected in the final outcome.