The craze for tattoos, in many instances end up in a search for a safe and effective tattoo removal method. In addition to the conventional methods of tattoo removal, like laser, dermabrasion, and excision, tattoo removal creams have also come into the picture and are gaining much popularity. So, let's take a look at how effective these creams are in reducing the visibility of tattoos. 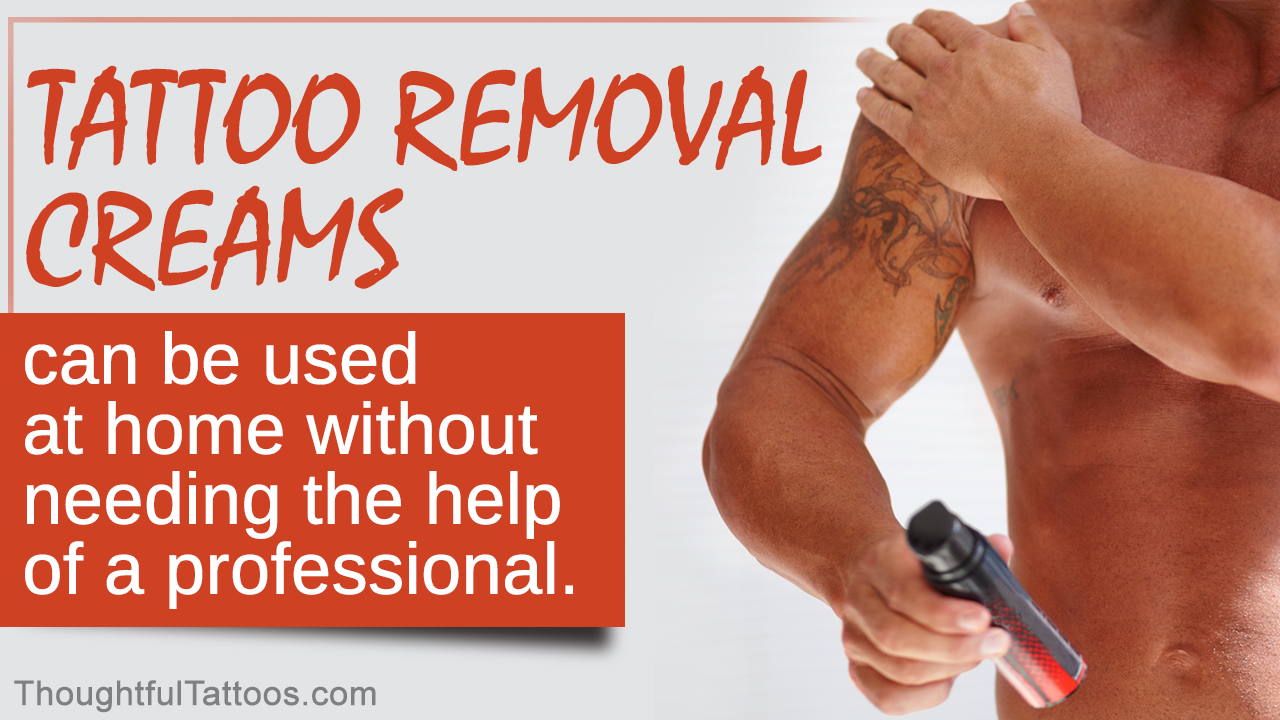 The craze for tattoos, in many instances end up in a search for a safe and effective tattoo removal method. In addition to the conventional methods of tattoo removal, like laser, dermabrasion, and excision, tattoo removal creams have also come into the picture and are gaining much popularity. So, let’s take a look at how effective these creams are in reducing the visibility of tattoos. 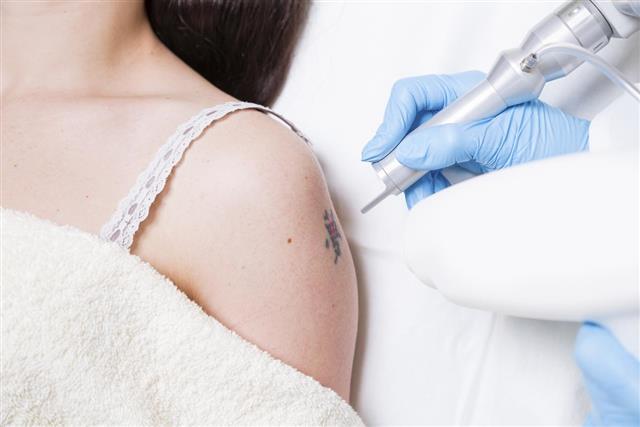 The tattoo that was once a style statement for you can become a thing to regret today, or you may want to ink your body with a new design. For varied reasons, one may want to get rid of an old tattoo, and begin the quest for an effective tattoo removal method. Though there are several other options for tattoo removal, tattoo removal creams have gained much popularity in the recent times.

The main advantage of the tattoo removal creams over their counterparts is that they are less expensive. They can be used at home without taking the help of a professional, and they are considered to be a non-invasive or minimally invasive method of tattoo removal. Most of these products also claim that they do not affect skin pigmentation. These creams work slowly to remove the top layer of the skin. Some products are claimed to penetrate the deeper layers of the skin, and thus, dissolve the ink. Let’s find out how much these creams live up to their claims.

It has been observed that significant differences exist among the different brands of tattoo removal products. Contrary to the popular belief that tattoo removal creams carry comparatively less risks, the use of certain products may not be safe at all. They may cause burning or scarring. Inflammation or infections may also occur, along with allergic reactions like skin rashes or blisters. One should particularly stay away from those products, which are marketed through unproven and unreliable sources. Let’s take a look at the reviews of some popular tattoo removal creams, so that you can choose wisely.

So far, Tat B Gone has some really good reviews. A large majority of users have claimed it to be quite effective. The cream has not been found to cause pain and skin irritation. However, some people are not very satisfied with the results. In general, the cream takes more time to fade a new and dark-colored tattoo, as compared to an old and light tattoo that has already faded to some extent.

Like Tat B Gone, Tattoo-OFF has some good reviews. In fact, it is claimed to be one of the best tattoo removal creams available in the market. The cream is reported to be gentle on the skin, and not cause any kind of irritation or pain. In fact, the Tattoo Removal Institute has tested Tattoo-OFF and Tat B Gone, and found that both the products do live up to their claims.

Wrecking balm has mixed reviews. Compared to Tat B Gone and Tattoo-OFF, it has been reported to work much slowly. The cream has been found to cause some initial fading only. However, some users are satisfied with the results. Wrecking balm has also been rumored to contain acids. In fact, some users have reported experiencing redness and skin irritation after using the product. However, the manufacturer of Wrecking balm claims that it is a safe cream.

As claimed by the manufacturer, Dermasal tattoo removal cream is safe and effective, and the user can see visible fading of his or her tattoo within 1 to 3 weeks. The manufacturer also claims that this cream can remove a tattoo completely within 3 to 18 months. The kit contains three products – a soothing agent, a protectant gel, and a topical solution. The soothing agent is used to prepare the skin before applying the topical solution. The topical solution is claimed to dissolve the ink, and thus, erase the tattoo.

The protectant gel on the other hand, soothes and protects the area being treated. As far as the consumer reviews are concerned, Dermasal has mixed reviews. 3 double-blind scientific studies conducted to find out the effectiveness of dermasal have observed that it works. But some people may experience skin irritation and pain while using it. So, people with sensitive skin should maintain caution.

The Profade tattoo removal system contains three creams – the first cream prepares the tattoo, the second helps break down the ink, and the third cream helps fade and erase the tattoo. The manufacturer claims that this product can remove a tattoo within 3 to 9 months. While some users have reported that their tattoos are barely visible after using Profade, others have maintained that Profade fades tattoos only to a small extent. In general, the extent of fading depends on several factors, including the age, color, and depth of the tattoo, and the kind of ink used.

The main ingredient of this tattoo removal cream is ‘alpha arbutin’, which can lighten the skin. The safety of this ingredient has not been properly evaluated, though it is usually not considered to be harmful. Another ingredient is kojic acid, which is known to be safe and quite gentler on the skin. As far as the reviews are concerned, TAT-Med has mixed reviews. Some customers have claimed that this product is completely ineffective. According to the manufacturer, TAT-Med can take about 12 to 24 weeks to fade away a tattoo, but many users have maintained that this cream works much slowly.

Rejuvi is a cream that can be injected into the skin with the help of a micropigmentation gun, which works like a tattoo gun. The cream then binds with the ink, and softens it so as to bring it to the surface of the skin in the form of a scab. The scab then falls off within a period of 6 to 8 weeks, and with that the ink also goes out of the body.

This technique is claimed to be comparatively more effective than other tattoo removal creams. But the process of inserting the cream deep into the skin with a machine can be a bit uncomfortable, though it is claimed to be much less painful than getting a tattoo. Many users have reported getting unsightly scars after using the product. Experts are of the opinion that caution needs to be maintained with the microinjection of a tattoo removal cream, until the safety of the procedure is established scientifically.

The success in tattoo removal depends on several factors, including the type of ink used, size of the tattoo, skin type, etc. It is easier to remove or fade an old, light-colored, or small tattoo, as compared to the large and dark tattoos. The complete removal of tattoos with creams is quite difficult, though some products may be effective in reducing their visibility. So, before purchasing any product, be sure to go through the customer reviews to get a clear idea about the experiences of different individuals. A large majority of tattoo artists and dermatologists are of the opinion that complete removal of tattoos is possible only with laser and intense light therapy. 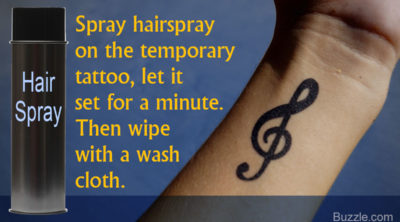 11 Super Easy Ways to Remove Temporary Tattoos Without Any Fuss 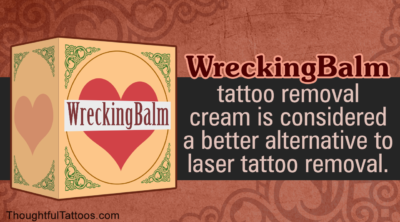 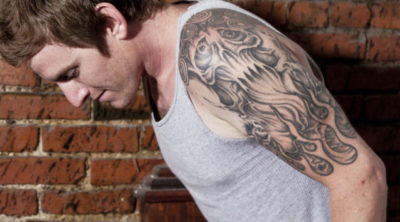